In recent times there has been an urgency in the arts to put out work as soon as it has taken shape. A rush to put out as much work as possible in as little time as possible perhaps to document the state we are living in; this strange way that we are all together separately. On different waka but in the same ocean. But in a te ao Māori context, time often moves differently. We stare into the distance, listening to our ancestors while our descendants tap at our backs.

Though this is their first duo album, Al Fraser and Ariana Tikao have been working together for around twelve years after they were introduced to each other by Richard Nunns. Ariana recalls; “We first met and played together at Pao Pao Pao at the Wellington Town Hall in 2008, which was the same year I released my Tuia album. I brought up two other players from Christchurch and then Al joined as well. That first gig went really well and then when I moved up to Wellington three years later we started playing together a lot more”. It’s hard to believe that this album is their first, as the pair have played together for so long and as a result of that many of these pieces have developed and grown over time. If anything, this album serves as a record of where these pieces currently sit in their wider journeys. It shows how music in this space isn’t a stagnant thing or something to be captured and preserved as it will always remain. But rather how the wairua of each piece changes over time, allowing them to have a separate autonomy to that of the individual players. The pieces are almost beings within themselves.

Both Al and Ariana have strong roots in the south, with Ariana being Kāi Tahu and Al growing up in Dunedin. On listening to this record you can hear a deep sense of place and in a way that doesn’t always come across with music alone. Al reflects; “I’ve learnt lots from Ariana’s experience of exploring her whakapapa, which is different to my experience. There’s intersections of understanding”. The time spent on this record shows in the way that deeper kōrero can be had through the music when words alone cannot suffice to explain a worldview. There’s a sense of partnership and a deep understanding of each other’s craft and the ways in which they differ.  Every part of this record feels like it was a conscious choice where each decision has a whakapapa. “I was interested in Southern Māori narratives before meeting Ariana and before doing this album, but this is a much different way than reading about it. It’s more of an organic contemporary understanding, whereas in books it’s something someone said one hundred years ago who the knowledge didn’t necessarily belong to”.

There’s a sense of the ability for music to be a resource within the context of this record which features Kāi Tahu pūrākau, traditions, and incorporates tributes to fellow artists and whānau alike with a level of specificity that somehow makes the pieces feel more relatable to all who possess a deep connection to people and place. Ariana describes; “I think working with older historical waiata and texts can help you to connect to the stories on an emotional level. That’s one of my motivations for doing that kind of mahi in terms of the revival of stories and older texts as well, allowing our people to actually experience it in an emotional way through music”.

As part of a whānau enriched with knowledge there’s a humble sense of responsibility in this record and in all music that Ariana works in, to share that kōrero with those who need it and to those who it also belongs to, who may not have found it yet. There’s also a generosity that comes through, not only in Ariana’s parts on the record, but in Al’s as well, with both musicians playing pūoro in a range of styles to support these feelings and embodiments in a way that shows the emotional range of what taonga pūoro is capable of.

Through this combination of approaches this record inhabits a space of being both a beautiful work of art, and a resource for Kāi Tahu, Māori, and indeed for people universally, in the themes it has around water, grief, and relationships with whānau, mentors, and ancestors. Ariana explains her connections to some of the ancestral content used in the project: “We personally don’t hold a lot of original manuscripts but the kōrero is there generated mainly from my Pōua Teone Taare Tikao, and I guess he was there as a representative of that communal knowledge. It really belongs to everybody from that region and there was a lot of knowledge sharing that happened with his knowledge being dispersed amongst different whānau. I definitely feel that a lot of those kōrero will have wider benefits and I’m excited to be involved in that kind of mahi of sharing the kōrero with others”.

With this record, the listening is just one part of the experience. Each of the thirteen tracks act as a window into a wider sound world with kōrero to accompany each track and cover art by Tony Bridge featuring throughout the booklet that accompanies the record in what has become known as Rattle’s signature modern style of presentation. The tracks themselves could be described by some as bare, as they only include vocals and taonga pūoro along with the production stylings of Steve Garden. But as a listener, each track feels complete in its own right. The spaces around the voices of both the pūoro and Ariana’s vocals feel as if they are designed to be there to let you fully comprehend each line of music and how they support each other and intersect. Ariana explains; “The intention of doing a recording with just vocals and taonga pūoro is different I suppose. There was a temptation to add in instrumentation of other kinds at one point but I’m glad that we didn’t. What we wanted to achieve was something with just vocals and taonga pūoro which in a way was inspired by Te More, an album that Richard Nunns did with Whirimako Black, because we both really loved that album. For ourselves, that was an interesting challenge to stick with that kaupapa”. The album features both written waiata, and improvisations that weave together to create a sort of circular story that links back upon itself giving layers of understanding to the record’s themes.  Al adds; “Those improvisations represent what we do live as well. For us performing live it’s usually quite different to what’s on the album, we just go where we want to when we play live with improvising”.

With these improvisations acting as guides in and out of waiata, the album itself has a water-like quality to it. A gentle current shifting you to where the duo want you to go, showing you things along the way in the landscape that might otherwise have gone unnoticed. Ariana explains; “When we had the cover image we realised that there was a lot of water-related themes in the album. During the writing-up about it we realised that there was a lot too with wai being to do with identity as well. Wai, wairua, waiata…  you can expand on the theme to make it wider than the initial theme of environment; our relationship with water”.  One of the waiata in particular, ‘Te Reo o te Wai’ tells a more literal tale of the journey of water in Te Wai Pounamu. Ariana explains; “The waiata was written after I’d been down to Aoraki Bound in March and tells the story of the journey of water from Aoraki down to the sea as well as telling the story of where we went. I was able to use the Kāi Tahu online atlas ‘Kā Huru Manu’, as a resource for specific place names like Te Manahuna, which is our name for the Mackenzie Basin”. In some ways, it’s hard to believe that the album wasn’t composed with the intentions of water and identity in mind. But with how we think in te ao Māori, all things are connected by identity and water, just here it was on a more subconscious or wairua level until it became clear to the duo. Al says:  “It’s interesting that it came at the end, it almost shaped itself”.

There’s a sense that while this record distinctly belongs to Fraser and Tikao, it is also its own entity. In many ways this is what a good collaboration should feel like, a work that is somehow greater than the sum of its parts. Perhaps this is due to Fraser and Tikao both being long-term players of ngā taonga pūoro and the changes that taonga pūoro can bring in people’s lives which is apparent too in interconnectedness of the album’s themes. On reflecting on his part of the journey, Al says; “With taonga pūoro, the more you do it, the more you become it”. Which is clear to those who take the time to explore the album and wider work that these two have created. 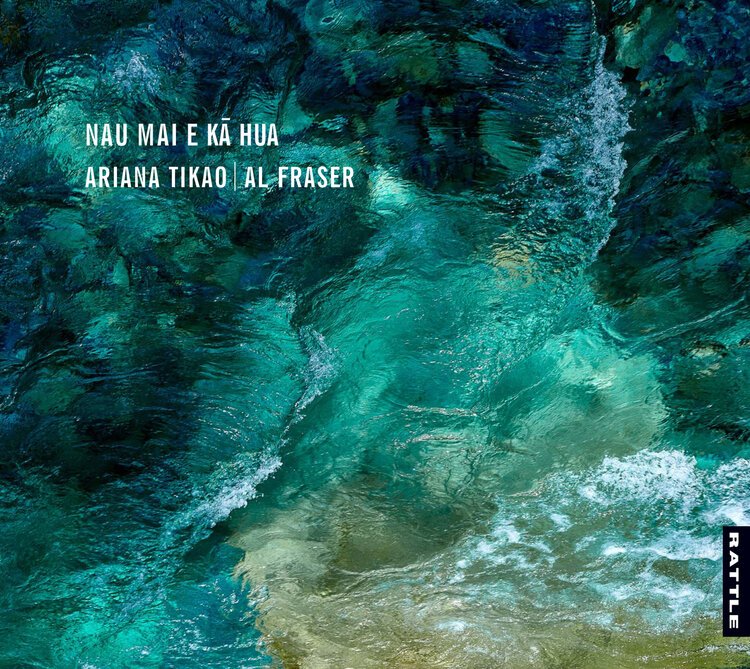 Ariana is a composer and performer of waiata in te reo Māori and English, as well as a leading player of taonga puoro. She was recently named as a 2020 Arts Laureate by the New Zealand Arts Foundation and was presented with the Jillian Friedlander Te Moana-Nui-a-Kiwa Award. Although now living in Wellington, her music is inspired and influenced by her Kāi Tahu ancestry and the dramatic landscape of Te Wai Pounamu, and explores her Kāi Tahu identity and mana wahine. Ariana began writing waiata in the Kāi Tahu dialect while studying at Otago University in the early ‘90s and started performing in 1993 with the folk group, ‘Pounamu’. She started her solo music career in the early 2000s and has become well known for her engaging live performances and critically acclaimed recordings. She has released three solo (Whaea, Tuia, and From Dust to Light), several collaborative albums, and music videos, one of which (for her waiata ‘Tuia’) won an international award at the imagiNATIVE film + media festival in Toronto in 2009. Ariana has been formally mentored by Dr Richard Nunns, and supported by Brian Flintoff, two of the people at the forefront of the revival of taonga puoro. Ariana is also a published poet and writer.

Al was born and raised in Dunedin where he learnt drums, taught himself guitar, and played in bands. He moved to Wellington in 1994 to study jazz guitar at the Massey University Conservatorium of Music, and attained a Bachelor of Music in 2000. Since 1999 he has been a practitioner of ngā taonga pūoro – researching, making, and performing with the instruments. His musical ability, artistic creativity, and respect for Te Ao Māori has brought him many opportunities to collaborate with some of Aotearoa's finest artists across various musical genres, artistic disciplines, cultural, and educational settings. Al has elegantly woven taonga pūoro into many projects that are recognised as being at the forefront of New Zealand arts practice and puoro Māori, through collaborations with artists such as Dr Richard Nunns, Riki Gooch, STROMA, Bridget Douglas, NZ String Quartet, Grove Roots, Israel Starr, and the NZ Symphony Orchestra, and in settings that span jazz and improvised music, ambient and environmental music, film, dance, Māori and classical music, the visual arts, and numerous recordings. He has been a member of collaborative music projects including Tahu, The Woolshed Sessions, Oro, Auaha, Shearwater Drift and Ponguru. Al was a Wild Creations Artist Resident in 2011, a Churchill Fellow 2016 and a researcher with Otago University and Hokotehi Moriori Trust 2017-2019. Al was a soloist on Michael Norris’ Mātauranga (Rerenga) that won the SOUNZ Contemporary Award at the 2020 Silver Scrolls.

Our Music is Trash