It all started in 2000, when Caro McCaw was applying for funding for the inaugural Dunedin Fringe Festival. She asked various friends to write proposals for events which could form part of this Fringe, and these friends included Kim Pieters and Peter Stapleton. Kim and Peter were partners, played in experimental bands together (Sleep, Rain, etc), and ran the Metonymic record label which released experimental/improvised music. Peter was a drummer with an extensive musical history (Terminals, Dadamah, Scorched Earth Policy, etc), and Kim was a painter, musician, and film maker. They put together a proposal for two shows, to be held at the Athenaeum – an old theatre hidden in the heart of the city, down a corridor next to the Regent Theatre in the Octagon.

A few months later, Caro contacted Kim and Peter to say that the funding application had been successful, and the Fringe was happening. Kim and Peter’s house at Purakaunui had burnt down recently however, and they were still traumatised. In Kim’s words, “we asked if we still had to do it!” Caro enthusiastically encouraged them, and so the wheels were set in motion. Peter set about selecting the bands, and Kim decided to make a film for each band to play to. The funding allowed for a new projector (which subsequently became the Arc Café projector), and the Athenaeum had a projection booth, so films seemed an interesting addition to the music.

Kim came up with the name “Lines of Flight”, from the philosophers Deleuze and Guattari whom she was reading at the time. The evocative title seemed to capture the improvisational spirit of the festival they were planning.

Peter reached out to bands he knew and thought would work well together. Some had been released on Metonymic, and some on Corpus Hermeticum, Bruce Russell’s label. All acts were improvised, though there was a broad range of approaches within that framework. The final line-up of 8 acts came from across Aotearoa. 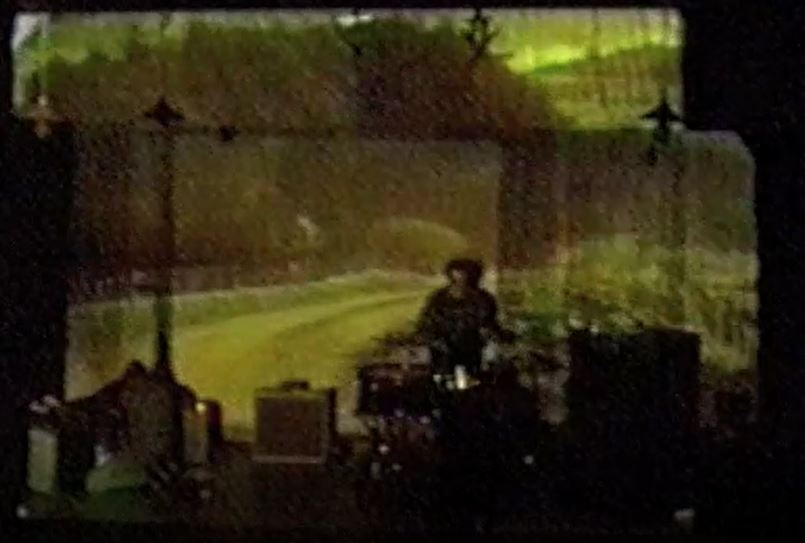 Flies Inside the Sun

There were two shows, both held at the Athenaeum, a dilapidated theatre/cinema next to the Regent Theatre in the centre of Dunedin. The space had been closed for many years and forgotten about, and was perfect – atmospheric, full of mystery, and complete with a film booth to project from.

The original intention of the festival, according to Peter Stapleton “was to promote the idea of live performance in this field.... [which] were comparatively rare. Our hoped-for outcomes were pretty modest .... I guess more 'exchange' between Dunedin and out-of-town artists.”

I was living in Auckland at the time and was friends with Marcel Bear. He performed music under the name Empirical, playing one or more of his home- made shimsaws – tensioned wire on a supporting structure, electrified, played with a violin bow and put through amps to produce beautiful teutonic drones. Marcel had been asked by Peter to perform at LOF but was not sure if he wanted to play solo, so he asked me if I would like to join him. I leapt at the chance, though was nervous at the thought of playing to some my favourite musicians! We had several practices in an industrial warehouse in South Auckland, and then set off to the other end of the country in October.

The festival was amazing, and the music flowed from act to act, enhanced by Kim’s visuals. There was a strong sense of community from the very beginning, as new friendships were made and histories exchanged. I felt like I had discovered my people, and this was a common refrain from the participants. The warm and generous positivity of Kim and Peter was an important part of what made the festival so good, and this set the tone for subsequent festivals.

My hazy memories include seeing Stephen Clover blow his amp within a few minutes of the start of the Birchville Cat Motel set, leaving Campbell Kneale to continue alone for the next half an hour, Matt Middleton (Crude) repeating his website address over and over again at the end of his amazing saxophone set, the joy of witnessing Peter Stapleton’s drumming, and the alternate world I entered when watching Sandoz Lab Technicians. But more than that, there was an exhilarating sense of freedom, community and musical permission. I loved it all.

Lines of Flight - A Personal History

The complete run down of every Lines of Flight festival from 2000 to 2019; as told by Peter Porteous